Three photos are shown below including:
1. Topside
2. Under deck view - the nuts on the screws have been removed
3. Threaded stud that is screwed in to tie bar anchored in the frame

Does anyone have experience on how this is disassembled to remove the chainplate so the area may be cleaned and re-bedded?

Hey Bill,
With the way the mounting bore appears in this previous thread https://j109.org/forum/viewtopic.php?p= ... late#p2152

I would check with International Marine in Bristol to see what their experience with these has been. https://www.imcne.com/ I'm still curious what the torque procedure is for these.
Top

Thanks for the info. I did see that old thread. It turns out there is a drawing on page 17 of the J/109 US owners guide that Bengt told me about. I've ordered a 2.2" spanner wrench that will permit unscrewing the cap located on the underside of the deck.

This will allow removing the upper section while leaving the tie rod in place and the length unchanged. I will unscrew the tie rod and count the turns backed off so I can restore it in the same position (with Blue Loctite). Once everything is removed, I'll clean up the area and properly rebed the chainplate.

I plan on doing this later this week and will take pictures to post here.
Bill Kneller
J/109 Vento Solare #266

I have had the whole assembly out of my boat. You probably won't need that special wrench. Just use a half inch wrench to loosen the tie bar. You will need to do that anyway to get the assembly apart.

Once the tie bar is loose the top cone will unscrew from the deck plate probably by hand.

I would not unscrew that top fitting without loosening the tie bar since that fitting is actually designed to be used on big boats for terminating rod on the mast and is not designed to be unscrewed under load. My last boat was 56' and had that those fittings on the rod and instructions were finger tight only.

While you have the whole thing out, it's probably worth getting it NDT dye tested by a pro.

You may also want to shine a powerful light through the deck to make sure that TPI got the core replaced with coosa (or similar) in the right place. On my boat they had two of the bolts through balsa and only one through the coosa that should have been under the deck fitting—the coosa was misplaced. You should also see a black material all around the bolt and chain plate holes. If you see balsa, TPI screwed up on your boat too.

See my last posting to the maintenance forum.

The next issue is torque to use on the bolts through the deck. I asked J/boats and got no help. So I used an engineering calculator and assumed coosa board in the deck to come up with 120 Inch pounds.

I would also replace the bolts with 316.

Make sure when torquing that the acorn nuts have not bottomed on the bolt head.

This torque seemed to work well with no crushing. If you can't get that much without crushing, that almost certainly means that TPI made the mistake above and your bolts are through balsa.

In that case, nothing for it but to cut the deck apart and replace the core. See my last post on how.

The next thing is correct tension on the tie bars. Again J/Boat were no help, and anyway I don't think a torque setting would work here since it depends on too many variables.

So what I did was put a 36" straight edge on the deck, fore and aft, and then tighten tie bar until the deck just started to deflect down. Call that the preload.

Then when the mast went back in I started tensioning the rig, all the while checking for deck deflection. In the end I had to tighten the tie bar one full turn to keep the deck flat. but that will vary with the age and state of the boat, I think. You will need to back off the rig each time you want tighten the tie bar, or you won't budge it. A long handled 1/2" wrench helps here.

Then go for a sail, and check again.

When done, my deck is flat on the outboard side of the chain plate and very slightly dished down on the inboard side, which makes sense given that the uppers have far more load.

Just to be clear, turn counting won't work to get the length of the tie bar right. (We tried it) Just two many variables in deck deflection, how tight the top fitting is screwed down, and exactly how the tie bar thread goes together.
Top

This is very good information. Thanks for posting. I'll do the additional checks for core as you suggest. The top cap is supposed to have Loctite on the threads so I plan on disassembling and cleaning those pieces too. For the NDT test, I will do a die penetrant inspection. That's fairly easy to do with all the pieces disassembled.
Bill Kneller
J/109 Vento Solare #266

The starboard side was completed today. This documents what was found and what was done. Since there was some salt water intrusion, the tang cup and cap had some salt build up that made loosening it a problem. The steps followed:

1. Loosen and remove shrouds
2. Unscrew the 3 phillips head screws and acorn nuts bolting the chainplate through the deck
3. On attempting to unscrew the tie rod from the trunion using a 1/2" wrench it was found that the tang cup and screw in cap were seized and would not allow the rod to rotate. Using WD40 sprayed into the tang cup area and hitting the cap with a hammer broke this free.
4. A metal putty knife was tapped around the seal between the deck and chainplate to break the seal.
5. A 1/2" wrench was used to unscrew the tie rod. This required going a partial turn in both directions to break the seal. Once the seal was broken, the tie rod with the chainplate held on by screw in cap was unscrewed all the way and pulled out the top.
Note: The Screw in Cap can NOT be turned to remove it while the chainplate is in the deck. The tie rod is at an angle to the chainplate hole. A cutout on the screw in cap is positioned facing outboard to allow this angle.

Once the assembly was removed, all the pieces were wire brushed and cleaned. The spanner wrench was not needed for the screw in cap. After all the pieces were cleaned the tie rod was screwed into the trunion to chase the threads clean. This resulted in being able to screw and unscrew by hand without without using the 1/2" wrench. The deck was inspected and found that this hull was properly built (e.g. all high density board and not balsa core around the chainplate). The rod was die penetrant inspected for cracks with none found.

The deck flatness was checked with a straight edge and it appeared there was some permanent deformation (dishing in) on the top surface.

It was apparent that the source of the leak was due to the holes not being countersunk. Thus over time the bedding compound broke down at the places where fasteners and the chainplate entered the deck from topside. The screw holes were countersunk topside and a a small bevel ground in the top deck surface for the chainplate hole. This allowed the new bedding compound to form a "washer" around these areas and be less susceptible to leaking. 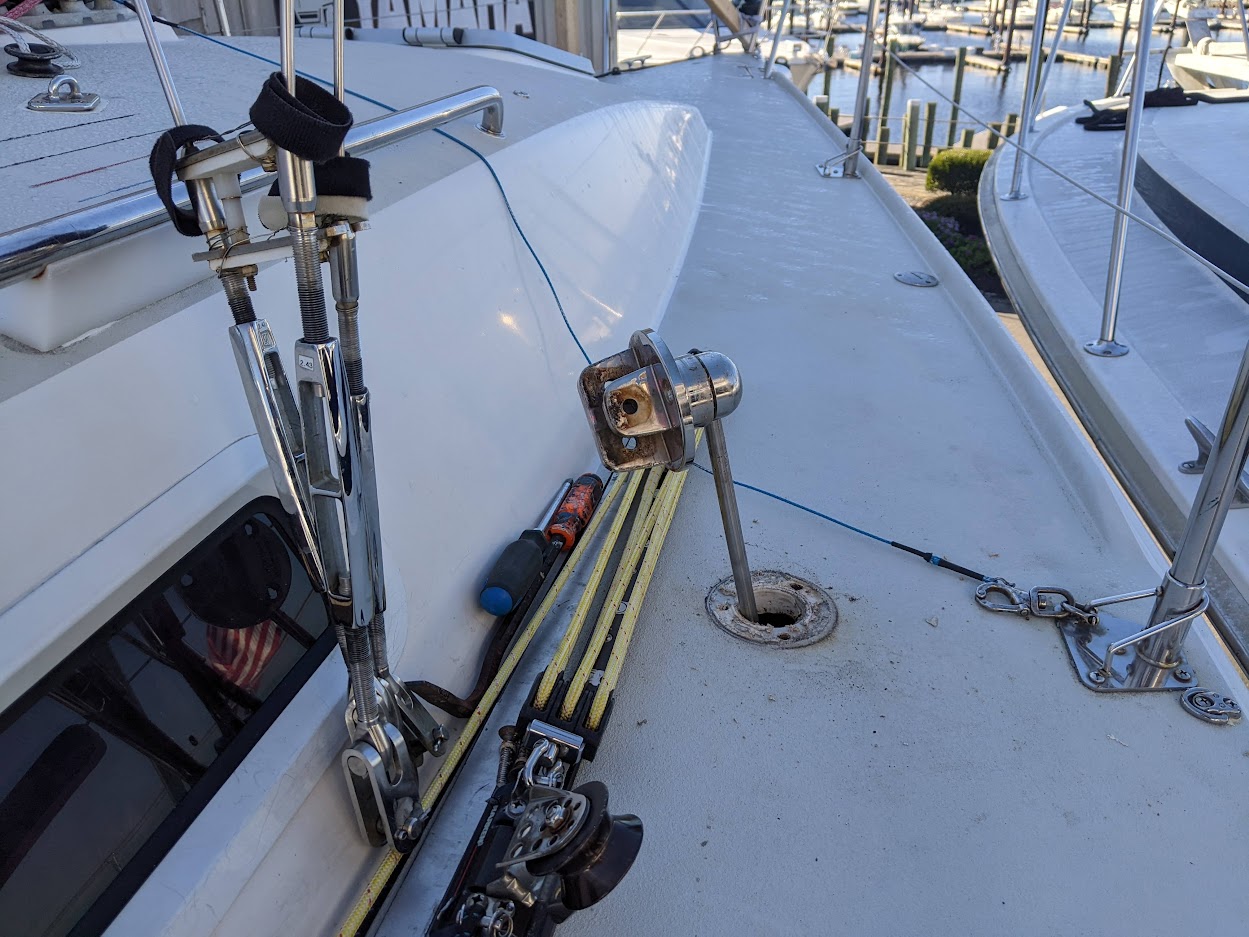 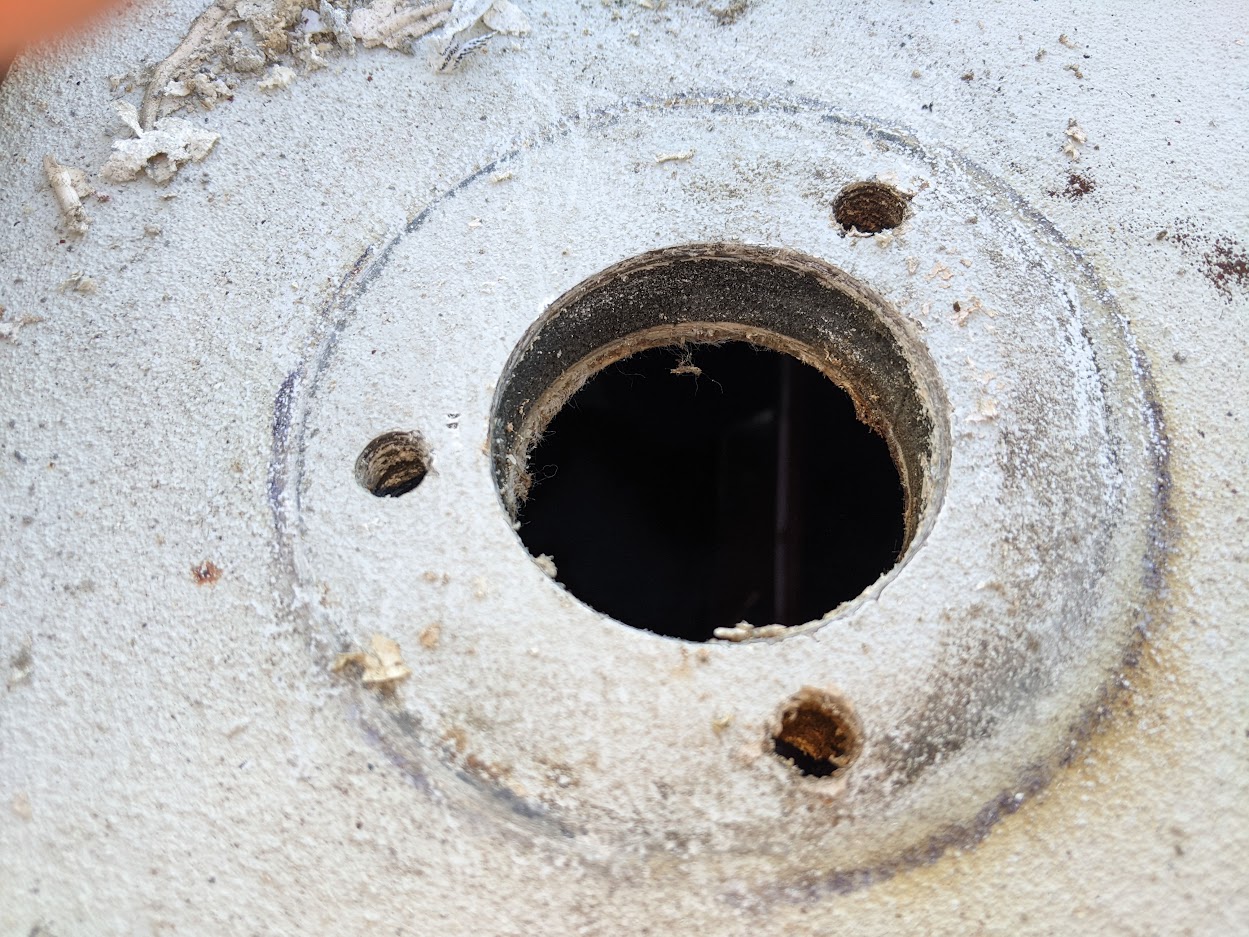 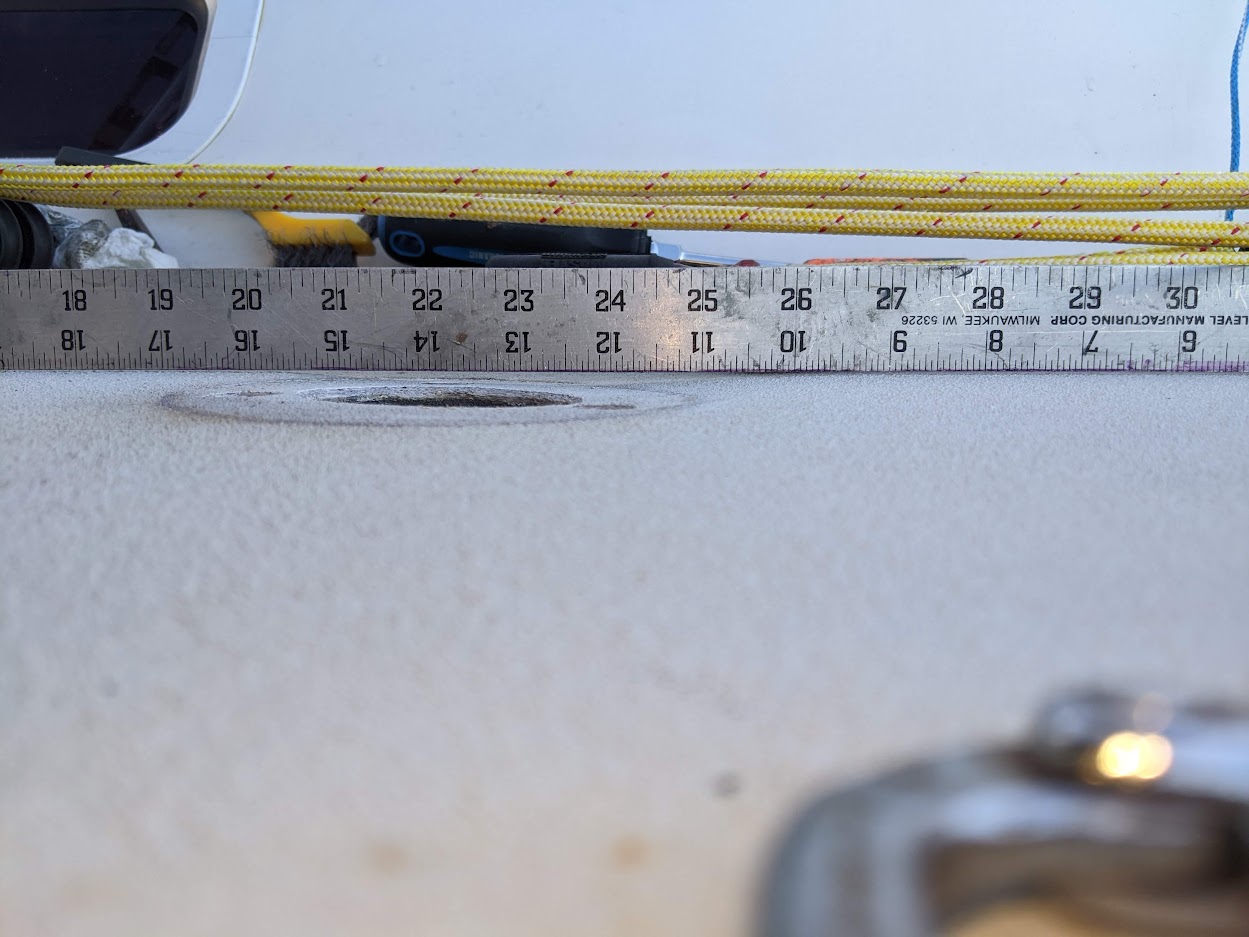 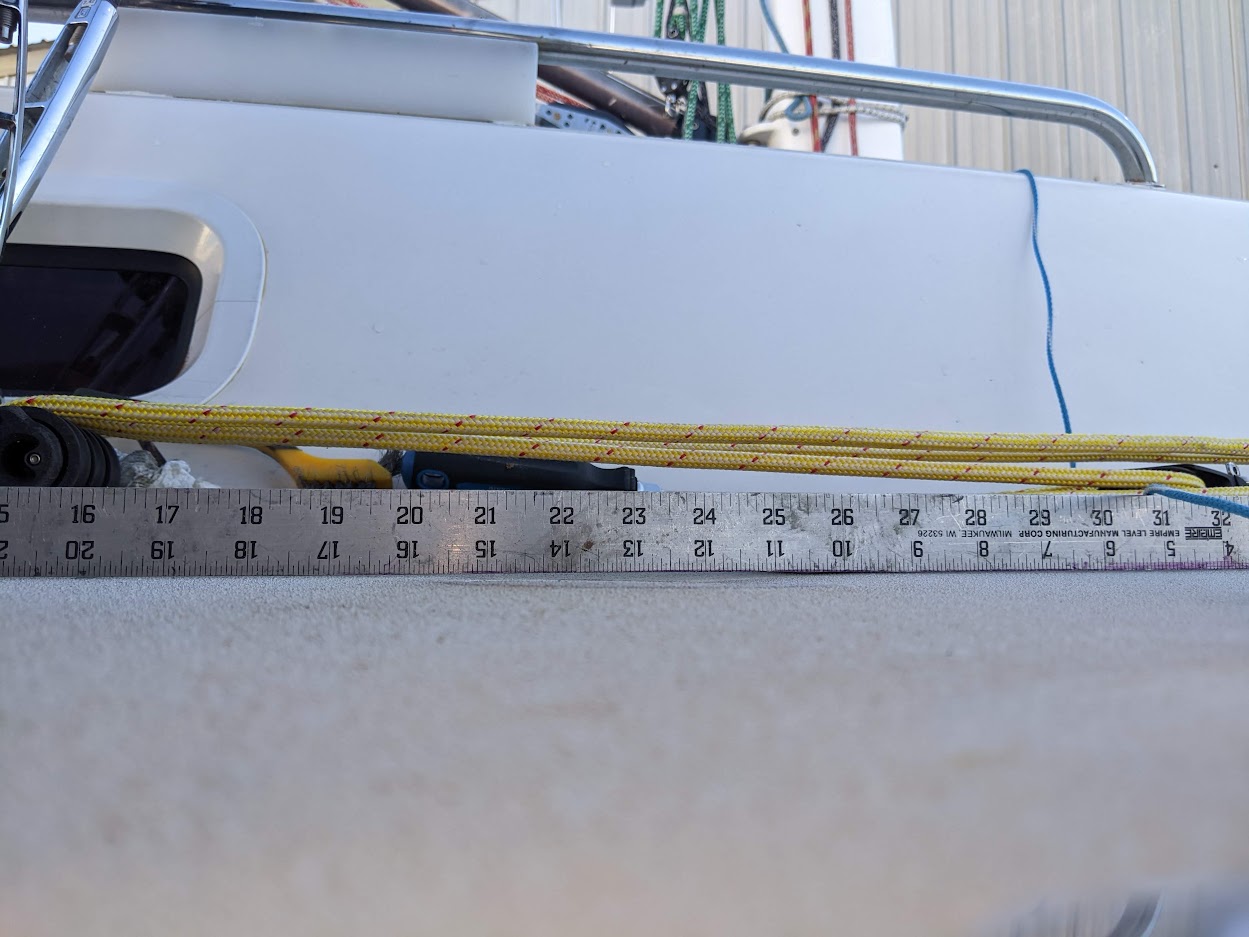 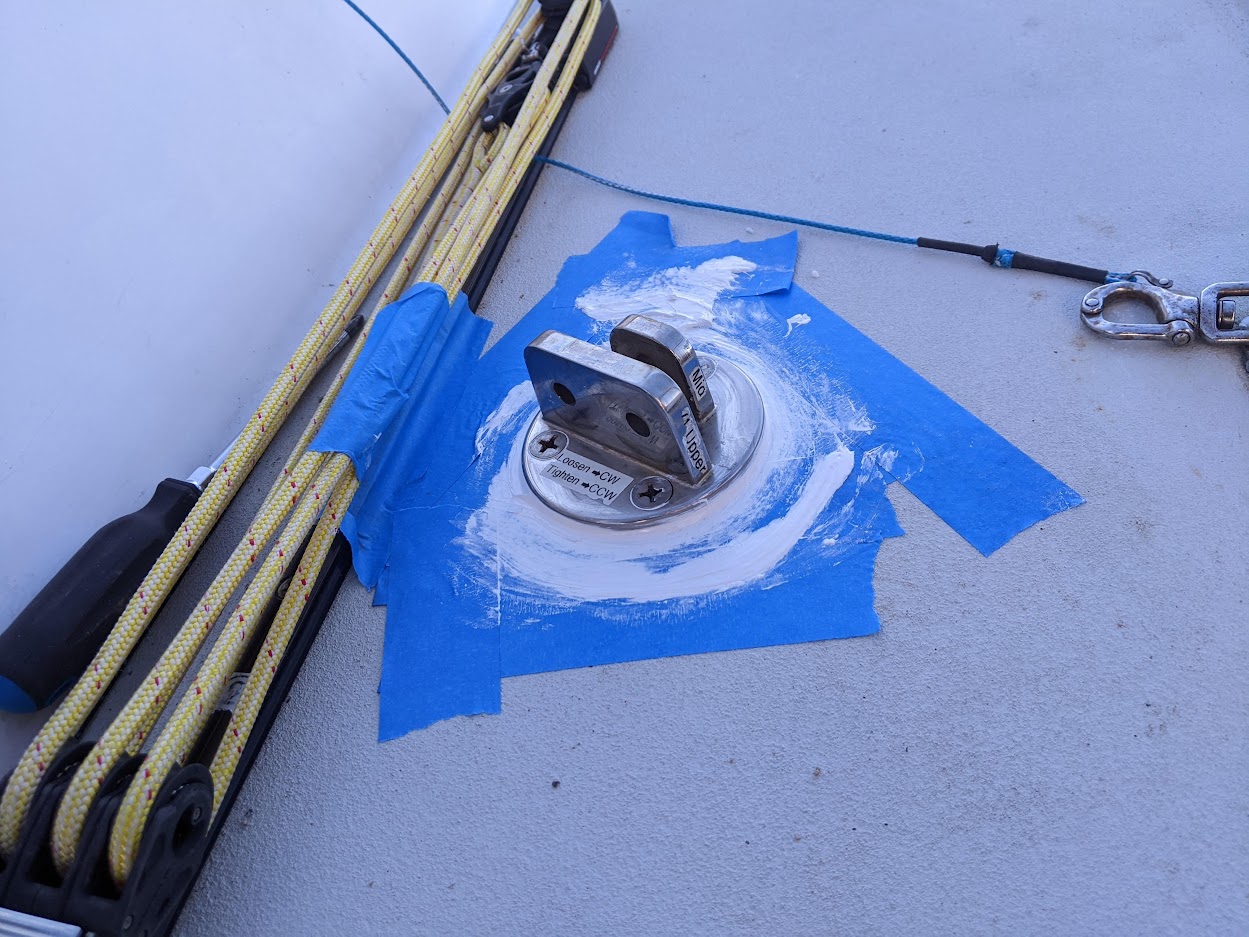 Underside rebedded with trim ring and screw in cover aligned 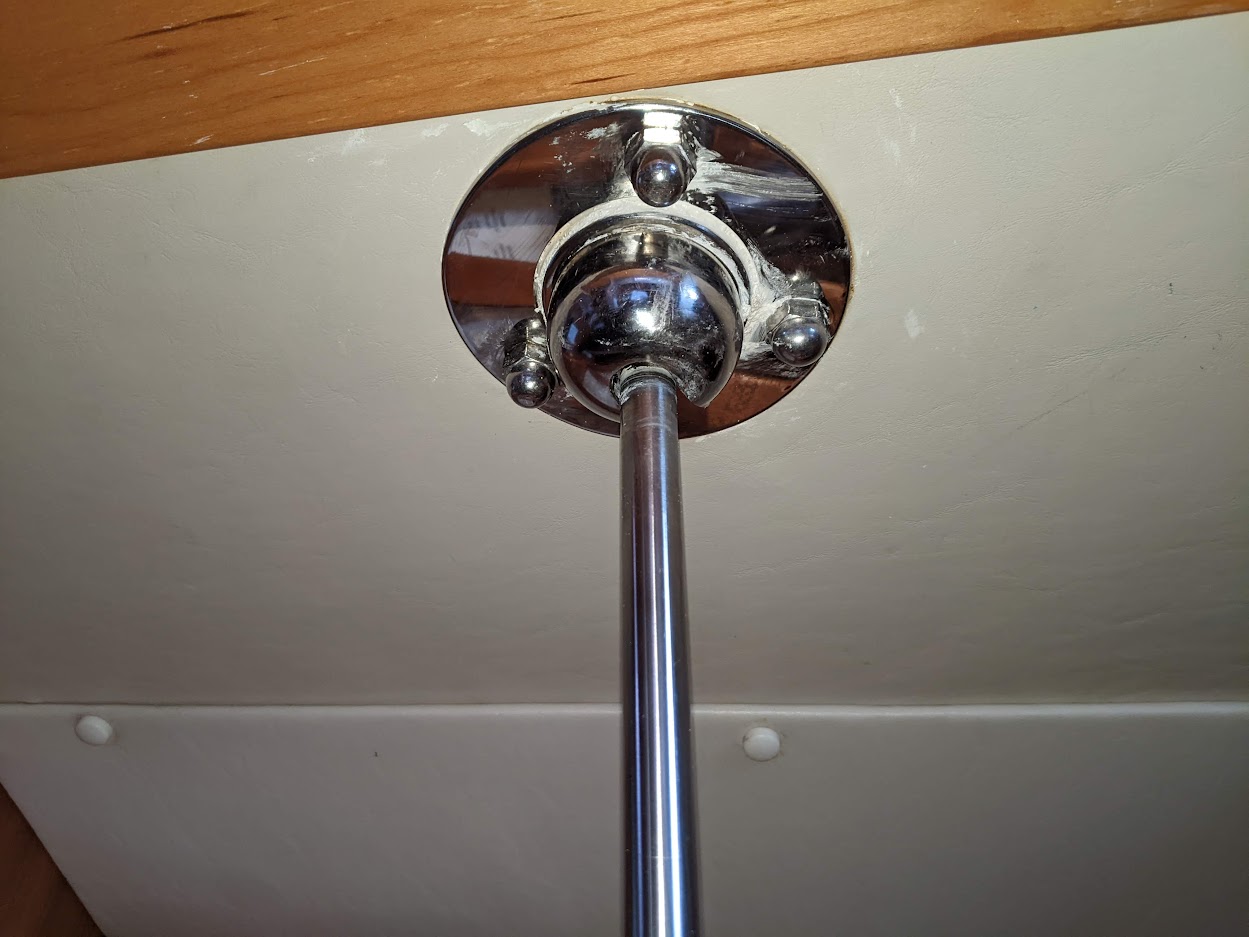 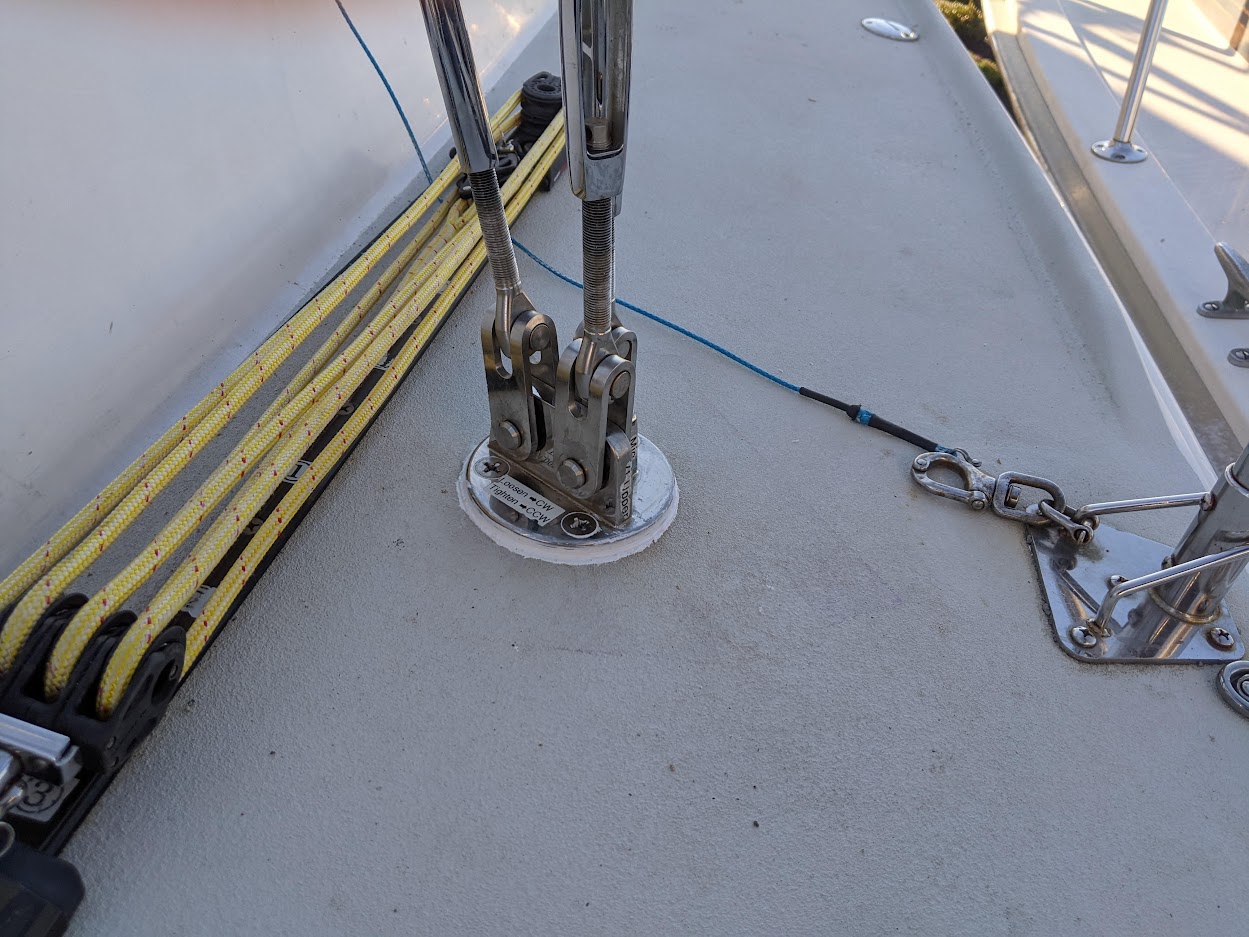