Topics about Class Rules and the RRS.

Interpretation by Class Measurer as Approved by the Technical Committee

Use of the Harken HSB135 (originally specified by J/Boats), Harken 144 Standard Cam Base Swivel (direct replacement for HSB135), or Harken 1574 Offshore Cam Base Swivel is authorized. Additionally, piece parts used on the mainsheet assembly such as clevis pins, washers, backing plates, U adapters, etc. may be sized to increase the strength and durability of the mainsheet swivel and block assembly. No modification that alters the purchase, location or mainsheet endpoint termination points is authorized.

The mainsheet swivel assembly and associated parts have exhibited many failures that include deformation of the U attachment between the swivel and lower block, bending and breaking of clevis pins that attach the lower block, failure of the pin that holds the lower block and failure of the swivel assembly plastic upper bearing race. Discussions with Harken indicate that the newer materials used in sails and lines that stretch less contribute to increased loads on the swivel assembly. High loads can be mitigated through procedures to reduce transient shock such as jibes, but this is not always possible.

The J/109 Technical Committee consulted with J/Boats and Harken to determine what might be done to improve the durability of the mainsheet swivel. It was determined that the existing system could be strengthened in a number of ways. Harken can provide mainsheet swivel HSB456, Description: #14CAM BASE-LG SWV J109 UPGRADE. This has been upgraded with a larger diameter pin mounted in the swivel and stronger Harken model H-29180A, U-Adapter with 1/4in pins made for the J/109. This assembly is bolt in compatible with the existing system.
Harken and the Class Measurer contacted the Oyster Bay Boat Shop to discuss designing and supplying a metal plate that would bolt over the top plastic bearing race. This would transfer the load from the plastic race through the metal plate to the four #10 mounting screws, thus preventing deformation of the plastic race. The plate is currently being designed and when available, the part number and ordering information will be posted.

Harken researched existing products to determine if there was a stronger assembly that could be used. The research showed that no products existed that used the same mounting hole location as the Harken 144 swivel. It was found that the Harken 1574 Offshore Cam Base swivel had increased load capacity in a similar configuration, but the mounting bolt pattern was larger and would require the four mounting base holes be drilled.

The table below provides a comparison of associated parameters for the two Harken swivel assemblies.

A stronger upper bearing race prototype unit was built and load tested to just over 4000 pounds. The design was completed by Bam Miller at Oyster Bay Boat Shop. The testing and test video was conducted by Kristian Martincic at Chicago Yacht Rigging - www.chicagoyachtrigging.com

A complete retrofit kit has been assigned part number OBM0109 with the new top piece, new u-adaptor, clevis pins, etc. available for order. Bam manufactured 38 units and created a step-by-step video to show how to perform the retrofit. This retrofit will not require any drilling or modifications to the existing mounting plate. 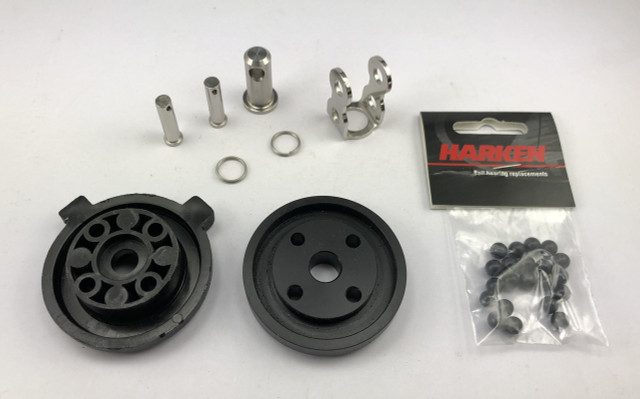 The retrofit kit is now available to order via the links below.

Below is a video showing the prototype being load tested.


Video by Bam Miller showing how to install the retrofit kit

The retrofit kit is now available to order via the links below.

This important upgrade should be done without delay. I found all the existing metal parts to be fatigued, including one broken part, hidden from view.

As I went to install the new kit, I found the base of the old U bracket broken in half, the two remaining pieces held together by a stretched and bent pin. The pin is easily 20% longer, thinner, and twisted at the end. It was only a matter of time before this was going to come apart.

Installation prep that could be helpful to know (there are no installation instructions)
- One person project, easy, under an hour if you never did it before, perhaps 30 minutes if you can manage not to drop the ball bearings.
- Would be a good idea to bring anti-corrosion paste to put on the four long screws where they pass through base plate. Not necessary.
- Prepare the workspace around you to catch dropped ball bearings, e.g. as simple as leaving lines on the deck.
- Bring a Dremel and abrasive buff wheel (180 or 280 grit), to clean corrosion off of screws and surfaces of parts being reused.
- Bring a vacuum cleaner, for the debris that will flake off into the cockpit.

While doing the install, watch out for these three things.
- When you remove the existing parts, note how the indents work to prevent the assembly from turning more than 270 degrees. You will need to repeat this with the new parts. It is not necessary to disassemble the two old halves of plastic from each other, none of these parts are reused.
- Use electrical tape to hold new parts in place / prevent escaping ball bearings during assembly. Tape the bottom half to the bracket careful taping across the outer edges, away from the four holes, and the idents don't trap inside each other. Then tape top half to the bracket after passing the four screws through the holes.
- Note: the hollow hole in the bottom-most plastic half is not used, the pin sits on top of it (rather than going through it) pointed towards the top half. Seemed counter-intuitive to me. If you feel you have the wrong size part, it may be because you are trying to stick it through the hole. Don't.
Top

I just went to upgrade the swivel for the mainsheet. With the older systems I had replaced the connection at least 3 times, and when I took this one apart the U-adapter and the pins were significally distorted, ready to fail again.

My question is - how smoothly did the upgrade go for most? I had no problems replacing the base, but I found if I used my old spring (and the 2 plastic washer) they were too small to fit over the larger U-adapter, and second, the opening for the main block that the upper pin fits through is too small. The newer larger upper clevis pin is ¼ in and it won't fit. I had to go with a smaller diameter pin (as the original), but longer to attach the mainsheet block to the swivel (see picture). Sort of defeats the purpose of the upgrade with the smaller diameter clevis pin being the weak link in the system.

Did anyone else have that issue? Do I need to upgrade the block? Just making sure I didn't do anything wrong.

Jerry, the upgrade was easy. Could the following be what is tripping you up? From my notes:

"The hollow hole in the bottom-most plastic half is not used, the pin sits on top of it (rather than going through it) pointed towards the top half. Seemed counter-intuitive to me. If you feel you have the wrong size part, it may be because you are trying to stick it through the hole. Don't."
Top

In 17 knots of wind, the enhanced mainsheet swivel broke. Pin sheered across middle of hole.

Was there any attempt by the main trimmer to absorb the shock as a controlled gybe? There is a limit on how much over-engineered this gets. The plastic cap is much stronger now.

ps from the look of the pin that sheered it is apparent there was an older crack that had the discolored rust stain. You should still inspect this periodically as you should do for all rigging components.
Bill Kneller
J/109 Vento Solare #266

I'm continuing this maintenance thread here even though it's in the Class Rules Discussion but can move over to maintenance so others may see it.

I continue to have issues with the mainsheet block connection blowing up at the swivel base. This is the 5th time. I know most have been on hard or accidental gybes, but this seems to be a higher incidence than I would expect. The issue is always the smaller clevis pin that inserts into the U-adapter to the shackle pin in the 75 mm block as part of the Harken's HSB112 assembly which is only 3/16" (5 mm). I did upgrade the swivel base so it now has accepts the 1/4" clevis pin. It seems the shackle pin size on the 75 mm block is too small and the weak link. I can only get a 3/16" (5 mm) clevis pin into it. It won't accept the larger 1/4" (6 mm) pin. For a 75 mm block that seems way too small.
Do others continue to have the same issue even with the swivel upgrade? Is it just our gybing technique? I this smaller shackle pin (5 mm) on the 75 mm block unique to me or is it just an older design? The swivel base upgrade had a larger U-adapter with 2 1/4" clevis pins, but I'm still limited to the 3/16" pin on the block.
Is this by design, sort of a safety valve? (So the clevis pin breaks before it pulls the swivel base out of the deck?)
Any way to upgrade the 75 mm block that has at least a 1/4" pin to accept 1/4" clevis pins? I can't find one. It appears to be a 75 mm midrange block but with 2 shackle pins. The closest I see from Harken is a Hexa-Cat base w/Cam Matic Harken (Part# 170) but would have to remove the cam cleat. The mainsheet diagram with the HSB112 appears to be attached to a Harken #1564 (75 mm Fiddle with cam-cleat) via a U-adaptor. The 1564 has a shackle pin of 5/16" (8 mm).
Is there a correct direction to place the U-adaptor? I've always placed it with the base down, arms up, but should it go the other way? Several pictures in the Harken catalog have it arms down, base up.
assume the correct U-adaptor replacement is Harkens #9050 U-adaptor that accepts 2 1/4" clevis pins?
Any contact at Harken I should ask?

Any help would be appreciated.
Top

In addition to the modification with the larger clevis pin I also put a "safety constraint" using 3 loops of spectra tied around the lower portion loose enough tp permit free rotation, and the same at the upper portion. That way if the clevis pin breaks you don't loose control of the main.

It has been a number of years since the pin has broken, and always on an uncontrolled jibe. The main trimmer has to be the "shock absorber" for the main when jibing the boat.
Bill Kneller
J/109 Vento Solare #266