This past season I had two independent Yanmar Mechanics suggesting the Exhaust Elbow should be replaced, stating 12 to 15 years of service is the limit. Our engine was commissioned early 2003 and would fall in that range. Since the engine is running at 3200 rpm without smoke or overheating I elected to ignore the advice and wait for haulout.
I have to admit we ran on borrowed time, the elbow was cracked from SB side down the bottom and up Port side in some areas in line with the internal wall separating the exhaust from the cooling water. If that crack would go any further it would be a real mess! The exhaust channel was also ~75% blocked.
I decided to replace the cast iron assembly with a SS unit from HDI Marine in Vancouver, WA. The cost of the complete new assembly was $300 including shipping to NJ.

This spring Vento Solare was launched and when the engine was started I had problems getting over 1800 rpm and there was much black smoke with unburned fuel coming out of the exhaust. I had checked the fuel injectors in the fall because I noticed that there was some unburnt fuel in the exhaust, but did not have the low RPM issue then. The engine on Vento Solare is a Yanmar 3YM30 but it uses the exact same exhaust system as the Yanmar 3GM. Unlike the problem Bengt had with a cracked elbow I had no external indications there was a problem with the elbow.

I spoke to Bengt about the HDI Marine stainless elbow and decided to replace the entire exhaust assembly between the head and the exhaust tube. This was available from HDI Marine as the GM Stainless Steel Exhaust Kit. Removal of the old exhaust was very easy since the 4 bolts that hold the manifold to the head are stainless steel and there was no rust. The elbow easily separated from the rubber exhaust by loosening the clamps and twisting the hose with channel lock pliers.

After installing the elbow (and one new fuel injector that I suspected had problems) the engine was started. Immediately I could see increased water flow out the exhaust. There is no smoke and I can now run the engine at rated RPM with no problems. 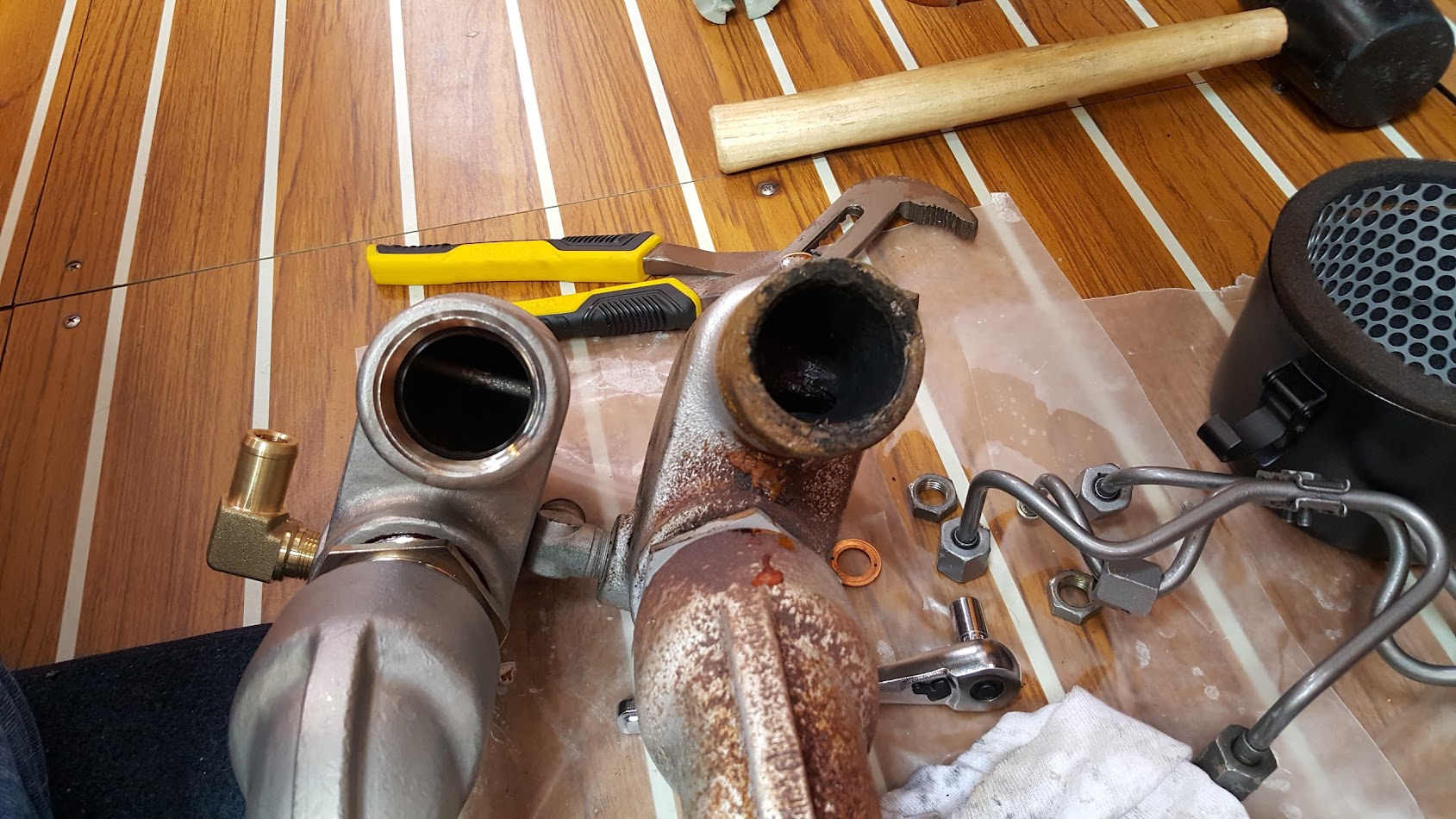 The picture below shows the new elbow installed. 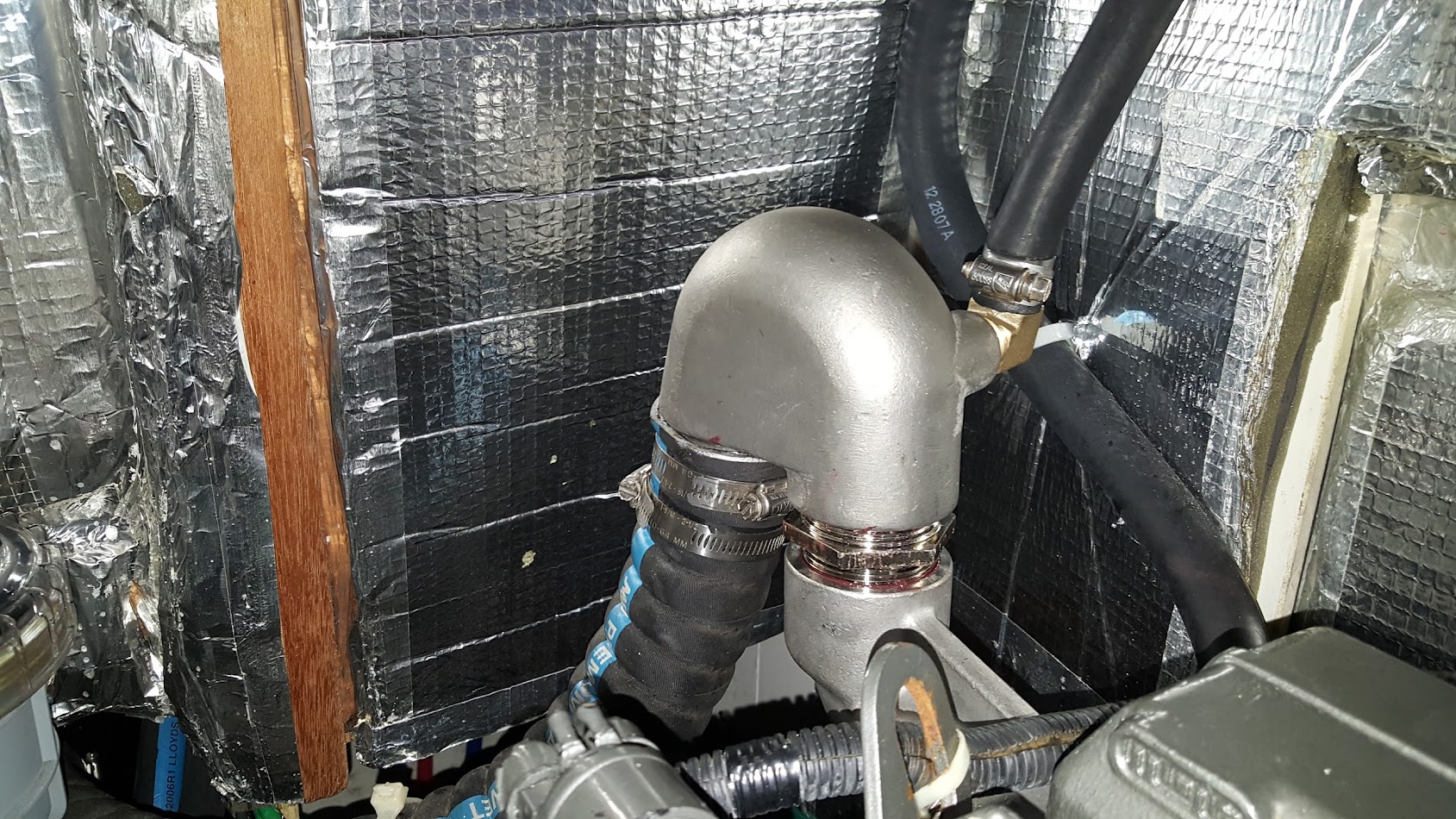 We had our first 5+ hour delivery over the weekend. The new elbow performs very well. The volume of cooling water is significantly larger, absolutely no black smoke and the engine runs much smoother and revs easier.
This is a trip we make several times a year and in the past we have used just over 5 gal for the trip, this time the consumption was just below 4 gal. We ran 3000 rpm the whole trip at 7.1 knots.

I am about to replace my mixing elbow.

Why are there fuel lines in the picture on this thread? Do I need to disassemble the fuel system?
Top

That isn't a fuel line. The line feeding into the exhaust elbow is the spray from the cooling system.
Bill Kneller
J/109 Vento Solare #266

The metal fuel lines are on the floor.
Top

I was working on the fuel pump at the time. It totally different job!
Bill Kneller
J/109 Vento Solare #266