the front foot or so of the clearcoat on the sprit is peeling off, whats best to recoat with ?
Top

I had the same problem within two years of having new clearcoat sprayed on the sprit. I spoke to Jeff Johnstone. He indicated that J/Boats no longer specifies clearcoat on the carbon sprits but uses black Awlgrip instead. My sprit has been pulled and sent to a local guy so he can spray it in his shop over the winter.
Bill Kneller
J/109 Vento Solare #266

thanks bill. I was wondering about that, thinking i'd just paint it black.
Top

Same issue on 254. I went against my better judgment and re clear coated it. It looks great but ceartain at some point it will need it again. My logic went like this
1. I have worked with carbon enough and I'm more confident in my abilities to get a nice finish with clear coat.
2. Vanity - I like clear coated carbon.
3. We're having a canvas cover made to protect it while at the dock.

If I were going to have a shop do it I would go the awlgrip route.

The sprit looks good Mark. Maybe the cover you are making will extend the clearcoat life. Obviously in my case I could have used something, but it was pretty dinged up after two years.

On a related note, when I disassembeled the sprit, it was very evident where any stainless had contacted the carbon. To prevent further electrolysis, I put heat shrink around the threads of any screws where they passed through the carbon and put a small dab of clear silicone caulk to keep out seawater. The excess was wiped off when the fasteners were tightened so there was none visible. I also put nylon washers under the heads of the screws that hold the end cap on.

The u-bolt assembly and tack block were changed to a low friction ring and fabricated a contoured Delrin base that made a sandwich inside and outside the sprit the provided a flat mounting surface outside and flat bolting surface inside. The tack block had dinged the gelcoat on the starboard bow when the sprit was retracted. This is no longer a problem. See the picture below. 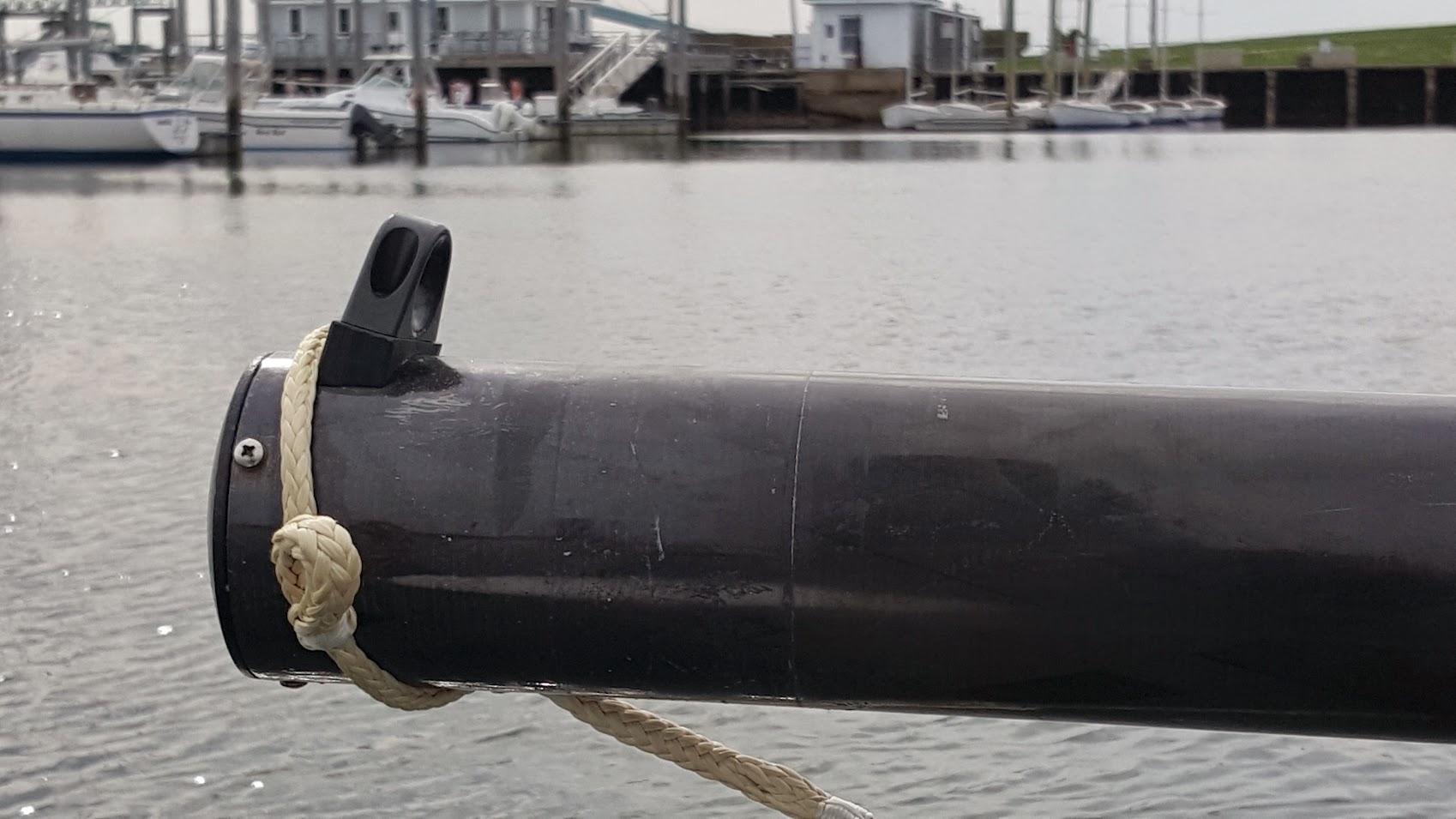 My clear coat has also peeled off in different places. I am thinking of using the Awlgrip blue paint I already have (blue hull) for touch ups, and painting the end of the pole affected.

Anyone have knowledge of how to prep the pole before putting down primer?

It looks like I should not be using sandpaper, how do I remove the clear coat back to the point I want to paint?
Top

Looks like ?
(i) scrape the paint off the portion of the pole that extends out of the J109, with a solid steel knife - hours and hours
(ii) sand with 320 grit
(iii) acetone
(iv) use awlgrip primer and base coat
Top

A very reasonable $300 is the cost at my local auto shop to strip and paint the UV damaged end of the pole.
Bruat Collision
Bruce Bruart is a boater himself.
Great Service, Excellent Work
https://www.bruartcollision.com/
Huntington, New York (Long Island)
Top
Post Reply
8 posts • Page 1 of 1