My older J/109 is starting to show her age. Went out for first race and found out the 1) the head won't pump water in, and 2) the Y-valve for tank/overboard is frozen and I broke the handle trying to loosen it. Thought it would be an easy fix, but it isn't- looking for some ideas
1) Does anyone have schematics on the head plumbing? I can't find it in the owners manual (I may need to replace some hoses and want to make sure I replace them correctly).
2) I have the replacement Y-valve from Bosworth (M-95), but I can't get the hoses off the older Y-valve. Any tricks? They seem to be glued on after 14 years. I've tried brute force, a pipe wrench, heat gun, nothings working. Going to try an auto hose puller (like a U-shaped screwdriver), but open for any ideas. The hoses are cut to exact length so I can't cut them. Hacksaw the old Y-valve apart?
3) Looks like I'll have to take the head out (or at least the intake hose off), but same issue, minimal flexibilty of the intake hose. Anyone repaired or replace the head?
4) Finally- I think they have the text in the J/109 Owner's Manual on Page 40 backwards. IT states: "The salt-water intake thru-hull is underneath the head sink and the discharge is in the starboard aft locker". The Thru-Hull Location Diagram on Page 22 is correct. It should be "The salt-water intake thru-hull in the starboard aft locker (below the battery charger) and the discharge thru-hill is underneath the head sink"

Thanks, for any insight. In hindsight, should have just called the marine repair guy...
Top

I agree that the J/109 manual has the description of the head intake and discharge backwards.
Bill Kneller
J/109 Vento Solare #266

Hindsight is funny like that, always 20/20 when looking back. I had the same thought when I replaced our valve and hoses, when it was all said and done I would have gladly paid any amount of money to have someone else do that nightmare of a project.

Thanks for advise. They were on solid. In the end I had to cut the hoses, then found out a new problem with all the foul accumulation of salt, calcium deposit that had cut the diameter of the hoses by 50%. Never heard of a "Joker" valve, but that had to be replaced as well- it is appropriately named. I've decided to replace the hoses. I will take better care to do the preventative maintenance.

When I rebuilt the Y-Valve I found similar scale buildup as Jerry did. The scale was soft so I scraped using a coat hanger to get as much out as I could. In the future I will use a solvent a couple times per season that contains Phosphoric Acid made for descaling marine heads. You mix up a couple gallons and pump it both into the tank, and pump some through the overboard and shut the valve so it gets to work on all the surfaces. Even better is to go out sailing and let the stuff slosh around. Let it sit for 8 hours and pump it out, then flush through the system with fresh water. This should dissolve the scale and keep the hoses open.
Bill Kneller
J/109 Vento Solare #266

Hopefully the final post in the plumbing saga. Just a double check before I re-install new hoses-

Jerry - I have a vented loop on Vento Solare. The hose runs from the head back aft with the loop positioned outboard near the top forward edge of the holding tank, then the return follows the path back. This picture taken when I did the purchase survey is the only photo I have. It is kind of hidden, but if you look closely you will see a piece of the vented loop. 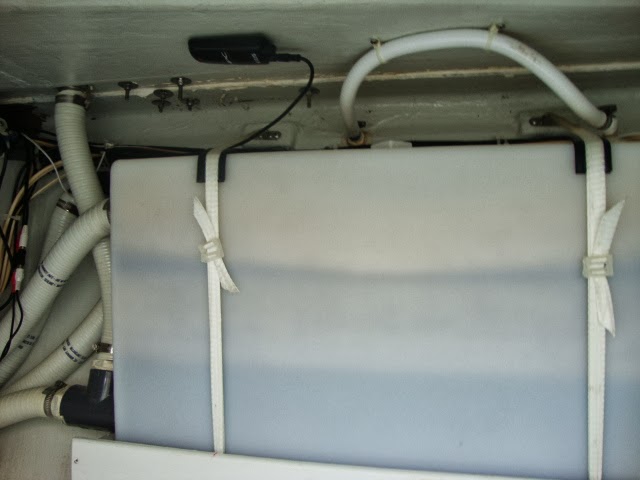 Upon its arrival from the UK, I discovered that my french-built 109 does not have a holding tank. I guess they weren't required as a factory installation?
I'm having that remedied before commissioning this spring.
The plumbing schematic in this post is helpful but some tips on the installation would also be great.
Does anyone have additional information on where to install the tank or even additional photos?
Is it always in the aft starboard locker? Could it be fit behind the moulded panel that the actual head is mounted on?
Any thoughts are much appreciated as I've got to get the yard going on the job.
Top

I don't know if these will help. Once I got my system back up and running it has been working fine. I did do an upgrade on the schematics and pictures for my boat in case I had to do this again. They are attached below.

Jerry - that is an awesome diagram you created. It accurately represents the standard J/109 Head system with the locations and flow. 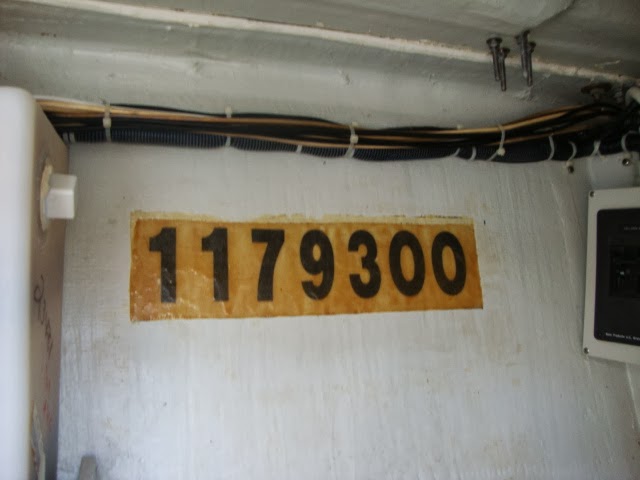 Thanks guys. These responses are very helpful. The only open question is the absolute necessity of being able to empty the tank overboard given the prevalence of pump out facilities in ports these days. I suppose its nice to be able to empty it when offshore, as desired?
Top

If you have the overboard already, I would install the y-valve and pump. Incrementally not that much more but provides the option if needed.
Bill Kneller
J/109 Vento Solare #266

I gotta say, those are the most dedicated diagrams I have ever seen.
Good work Jerry!
My webpages: Toodrie - EatrBox
Top

Waste is siphoning back into our head this season, half a bowls worth, from minutes to after an hour after every use, even though the holding tank is empty. The position of the Y valve doesn't matter, happens in both positions.

New Joker valve and base gasket installed at start of the season successfully removing a tiny leak in the system.

Holding tank was accidently overfilled a week or so, but I think this problem was happening before that