I don't know how many people have issues with the alternator belt generating a bunch of black dust as I have experienced on Vento Solare. After doing some research, I decided to upgrade the V-belt and pulley system to a serpentine belt system. This provides more surface area for the belt and prevents slipping. The engine is a Yanmar 3YM30 with a Balmar 7 Series 110 amp alternator. The Serpentine Belt kit for this engine is 48-YSP-3YM-B with the 48-AM-102 alternator pulley substituted for the Balmar alternator (3YM30 stock alternator is Hitachi 65 or 80 amp). The kit comes with all parts required and a spare serpentine belt. Here is a Youtube installation video link. 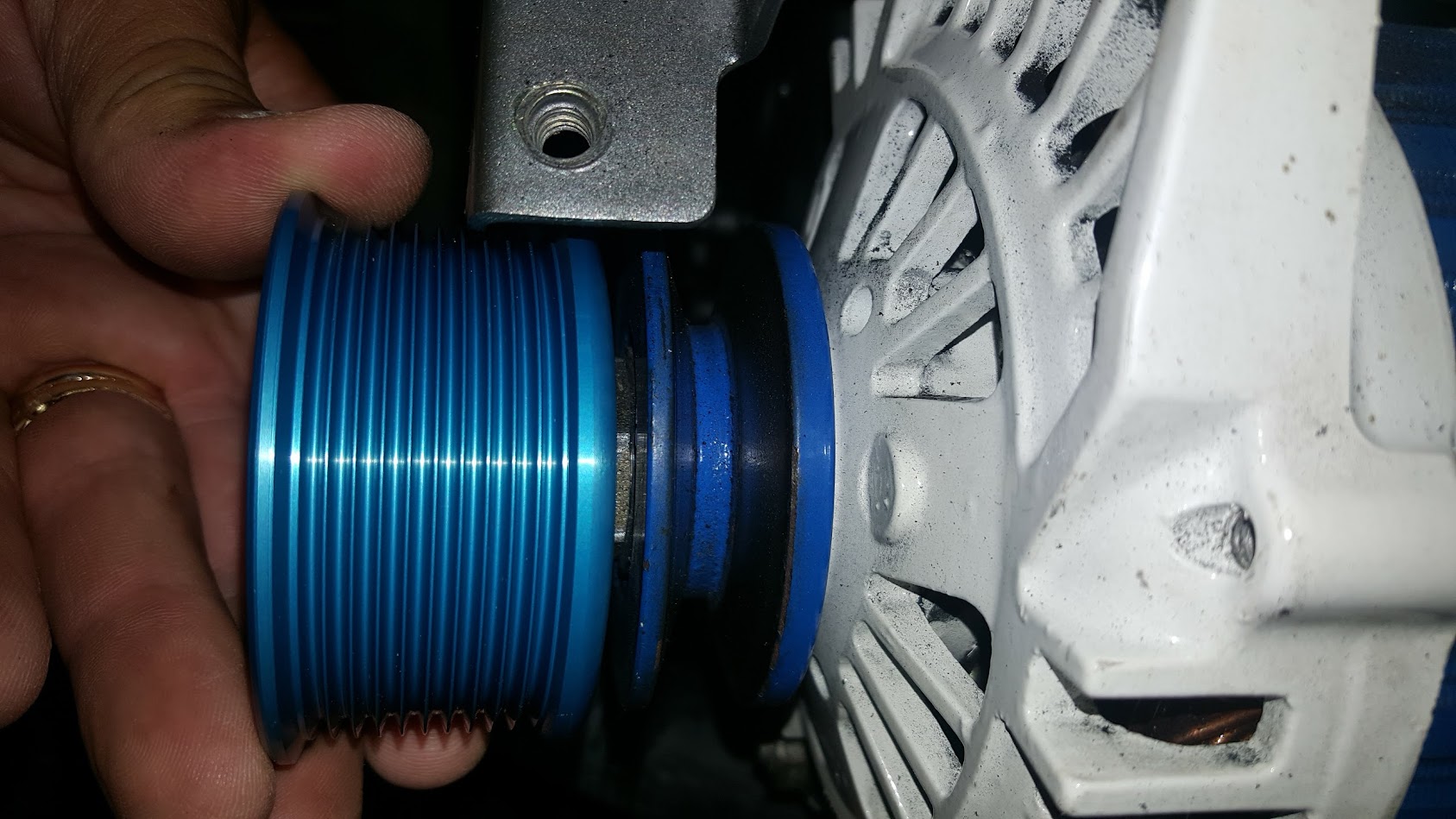 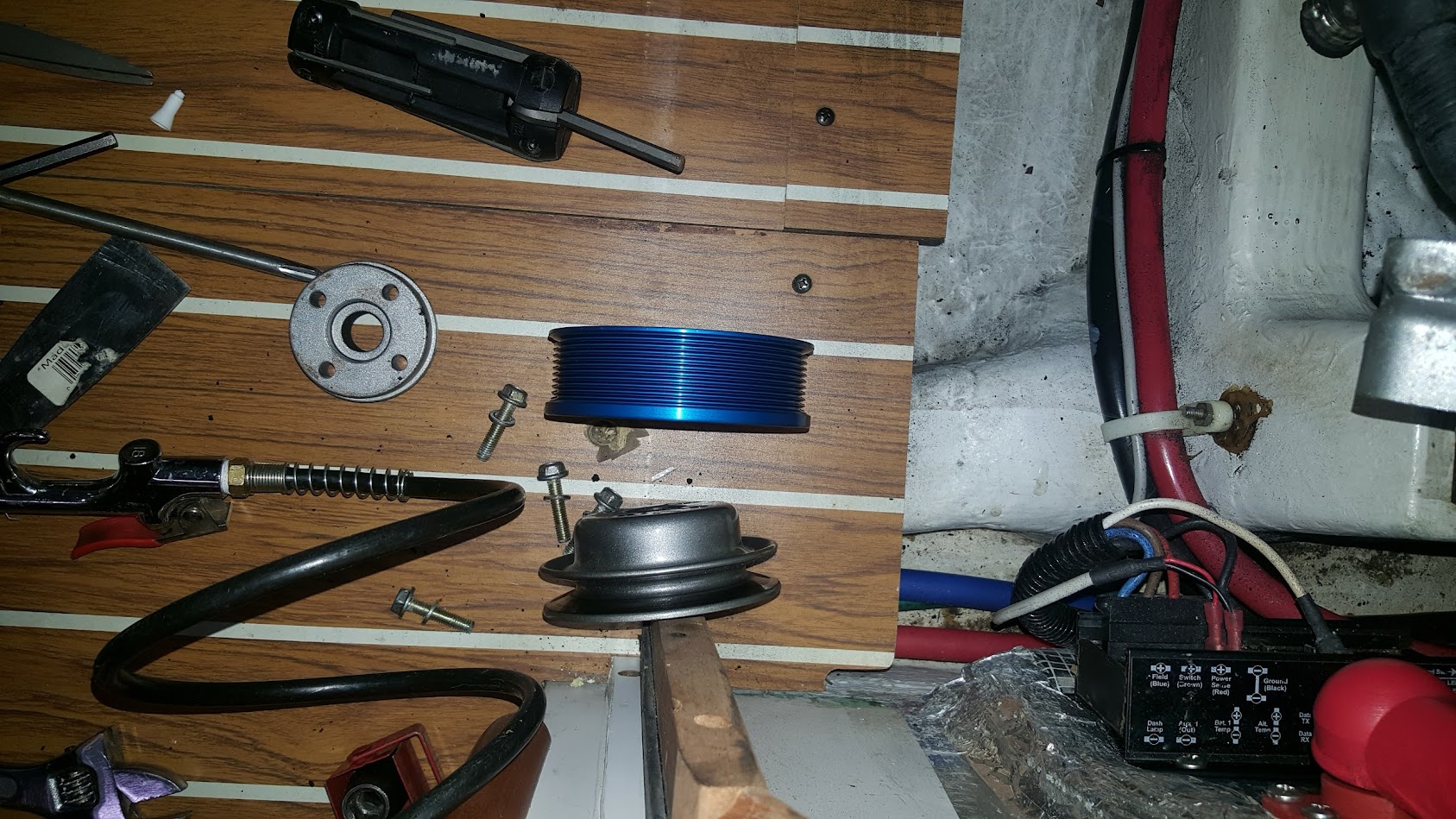 Installation before belt guard is attached 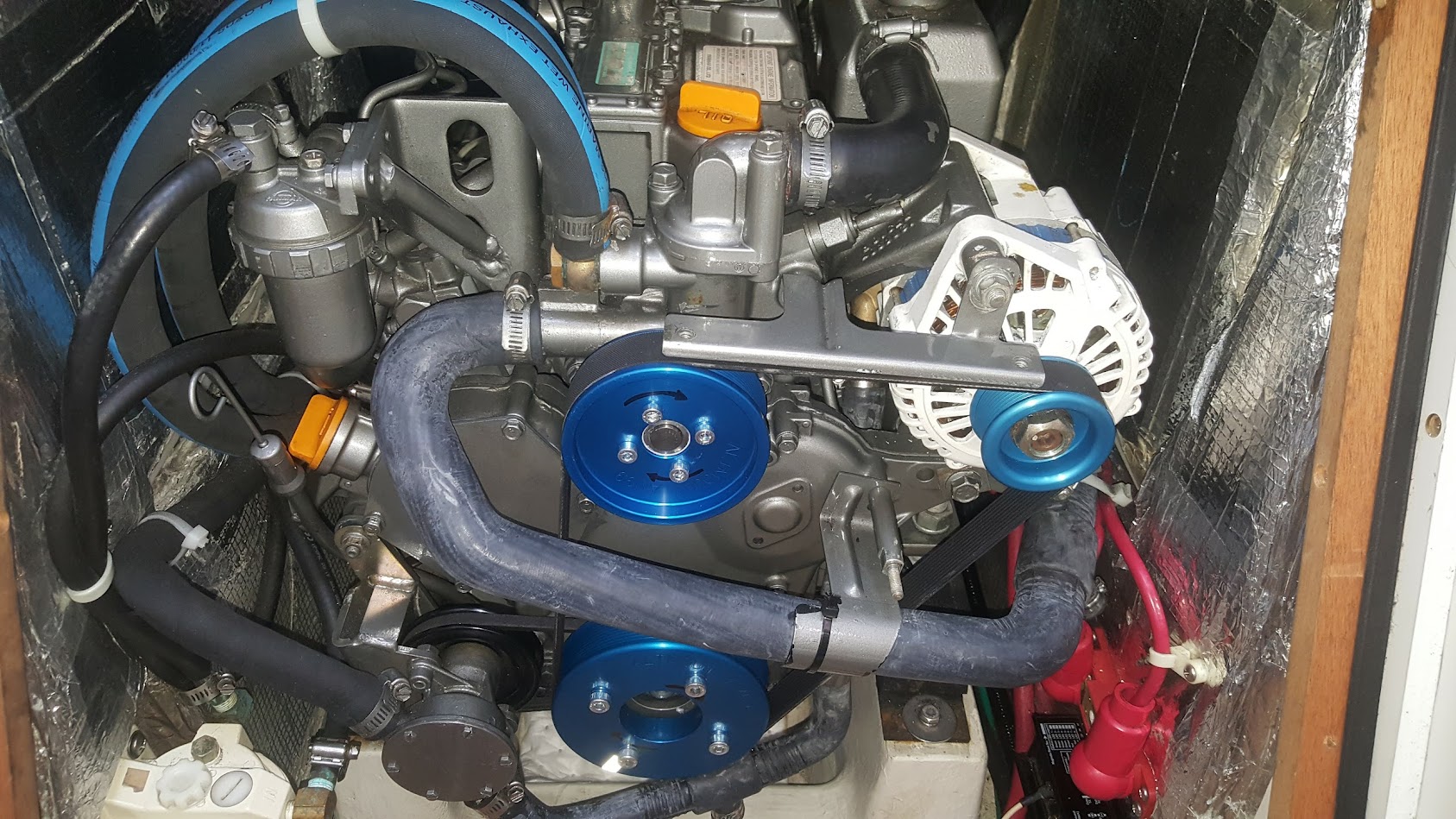 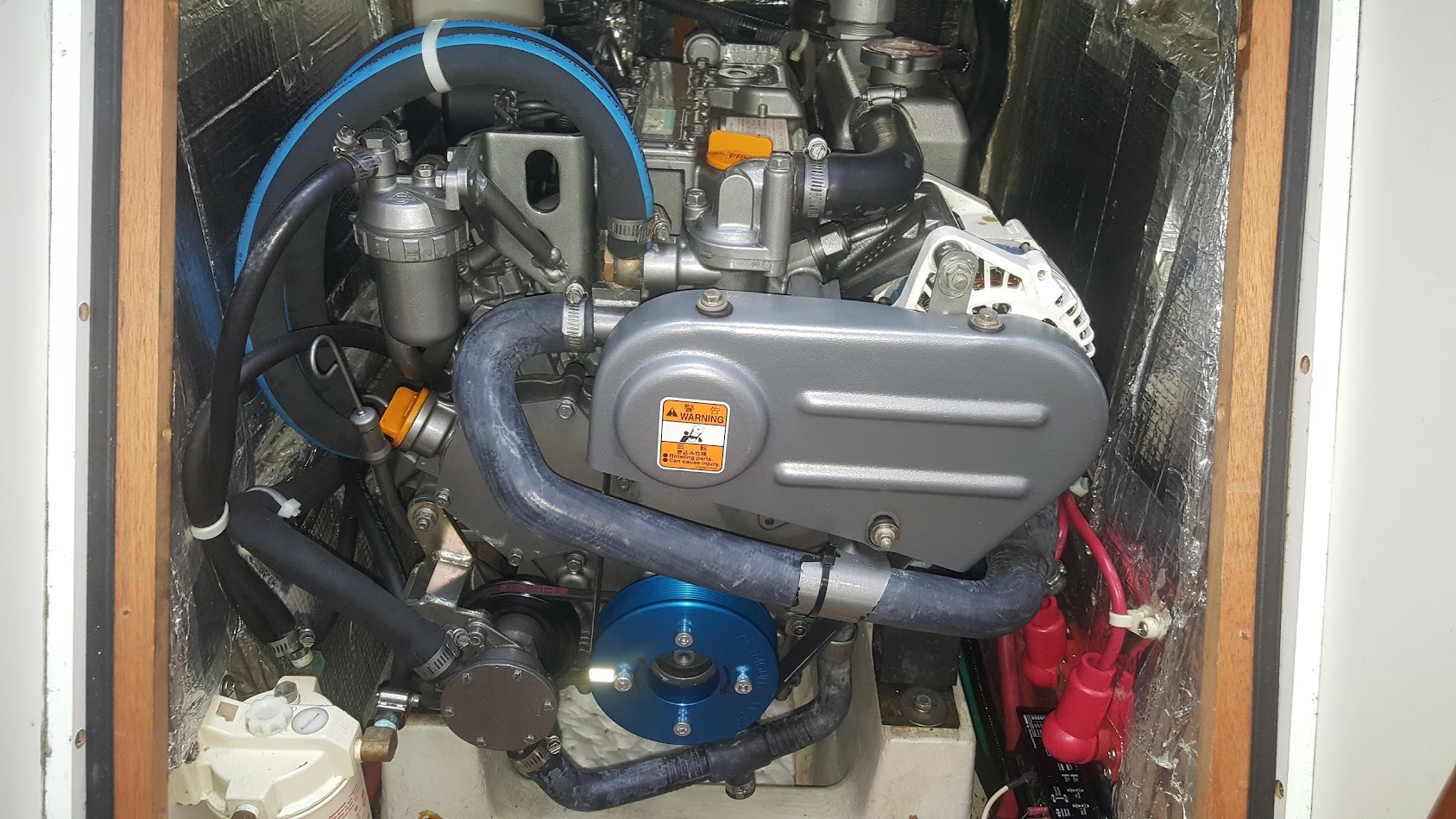 An update on the performance after installing the serpentine kit. The engine is noticeably smoother due to less vibration. Apparently the V-belt slipped enough and "chattered" causing the alternator to shake. With the serpentine belt there is absolutely no vibration at any engine rpm and I have not seen any belt dust accumulate as with the v-belt.
Bill Kneller
J/109 Vento Solare #266

I had the same problem with the black dust. It's the alternator belt being eaten up and blowing dust EVERYWHERE. I discovered accidentally that if you have the blue wheel on the Alternator that's the reason. The blue belt wheel does line up with the Yanmar engine and you burn up belts (and blow black dust everywhere). I had the alternator rebuilt and the wheel changed and NO MORE DUST. I think the replacement wheel is white.

Preparing to upgrade to serpentine belt system/kit to solve the belt dust problem and have noticed on our boat that the raw water (RW) pump belt appears to also be generating belt dust - d/t poor alignment of the RW pulley. Has the RW pulley alignment been a problem for other boats or is there enough "forgiveness" in this part of the system that it is not a problem? Fixes/Suggestions?
Mike Farthing
Hull 254
PDX, OR
Top

What are the benefits to make this worth $487? (for the kit).
Does anyone also buy the $72 belt buddy mentioned in the video?
Top

Greetings all. As the prior owner of #261, I also saw a lot of belt dusting. What I found is that on #261, the boat came with the refrigeration option which included the 3rd battery and the larger (than Yanmar OEM alternator). The larger Balmar alternator came with a small pulley (I think it was blue color.) The tight radius is what causes the belt dusting. I spoke to Balmar and they gave me the info and said that a smaller pulley makes more power at a lower RPM. A larger diameter pulley requires more RPM for the same output. (As a side note, you should run the Yanmar hard on a regular basis.)
Suffice to say, they had a larger diameter pulley (that is more normal size for the alternator) that I bought and I think that cured the belt dusting issue. John G. now owns #261 and maybe he can shed light on the current status of his alternator. From my USCG marine inspection service, belt dusting is usually from tight radius or pulley misalignment friction.
Top

The additional benefit I noticed after installing the Balmar serpentine belt kit is the engine ran smoother. This is because the load on the alternator was sufficient to cause the regular belt to slip and then catch again. Tightening the belt helped some, but did not eliminate the problem. I always thought it was just an attribute of the diesel engine. With the additional area provided to the belt on the upgrade there is absolutely zero slippage and the engine is much smoother at all RPMs.
Bill Kneller
J/109 Vento Solare #266

Does installing this new belt system cause the tach pulse ratio to change?
Top

There is a slight difference. I used a hand held laser tach I bought on Amazon for $15 to recalibrate the boat tach. The calibration of the hand held was verified as accurate with an AC powered fan, measuring the blade rate.

Use this from another thread to calibrate the tach.
Bill Kneller
J/109 Vento Solare #266

Right on! This is a must. While I've only run it less than hour so far, the engine does indeed run so much better (even quieter). I always thought it vibrated a lot – in retrospect, I’m surprised now it never jumped off its mounts. Thanks for the tip.
Top
Post Reply
10 posts • Page 1 of 1